OKLAHOMA CITY, Sept. 1, 2022 – The Oklahoma City Blue announced its 2022-23 season schedule today and will open the season on the road on Friday, Nov. 4 at G League Ignite. The slate features four Blue Field Trip Day games, including a special Jan. 24 matchup against the Grand Rapids Gold at the BOK Center in Tulsa, Okla.

The Blue home opener on Wednesday, Nov. 9 versus the Santa Cruz Warriors tips off a seven-game homestand at Paycom Center that will serve as the team’s home arena for the second consecutive year.

The first 16 games on the Blue schedule are part of the Showcase Cup, a competition featuring all 30 teams that will culminate at the NBA G League Winter Showcase with the Showcase Cup Championship Game.

The teams with the best winning-percentage in each regional pod, as well as the four teams with the next best win-percentage across the league, will go on to play for the Showcase Cup in a single-elimination tournament at the NBA G League Winter Showcase from Dec. 19-22. The remaining G League teams who do not qualify to compete for the Showcase Cup Championship will each play an additional two games at the Winter Showcase outside of the tournament format.

This year there will be 15 Blue and Thunder games played on the same day at Paycom Center. The Blue will host its annual Field Trip Day games at Paycom Center on Nov. 16 vs. the G League Ignite, Feb. 28 vs. the Sioux Falls SkyForce and March 8 vs. the Salt Lake City Stars.

The complete 2022-23 season schedule can be found here. If fans are interested in Blue season tickets, group experiences or other ticket opportunities, please call 405-208-HOOP (4667) or visit okcblue.com. 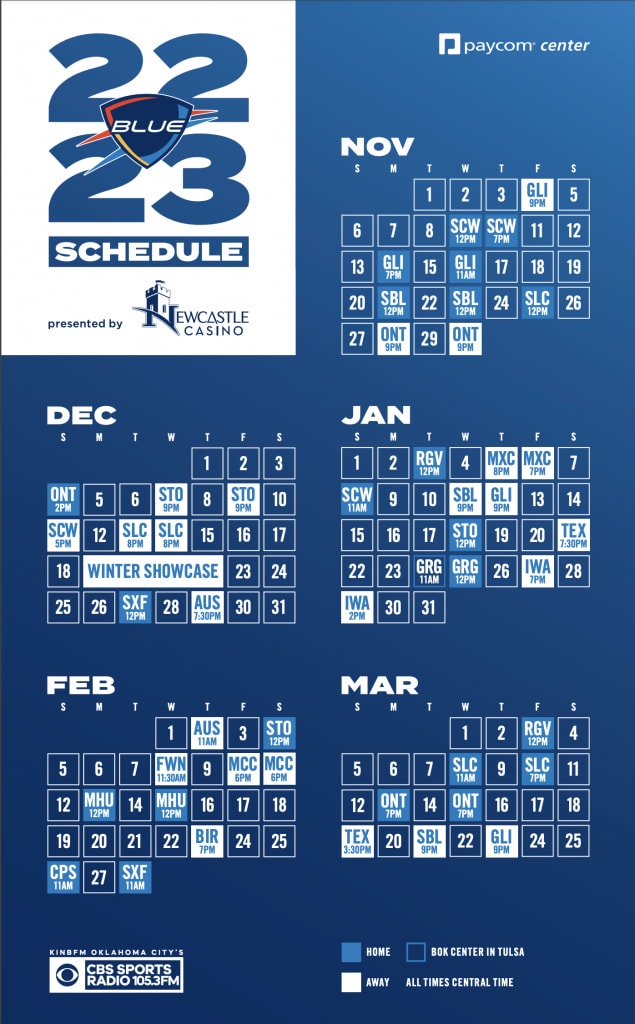